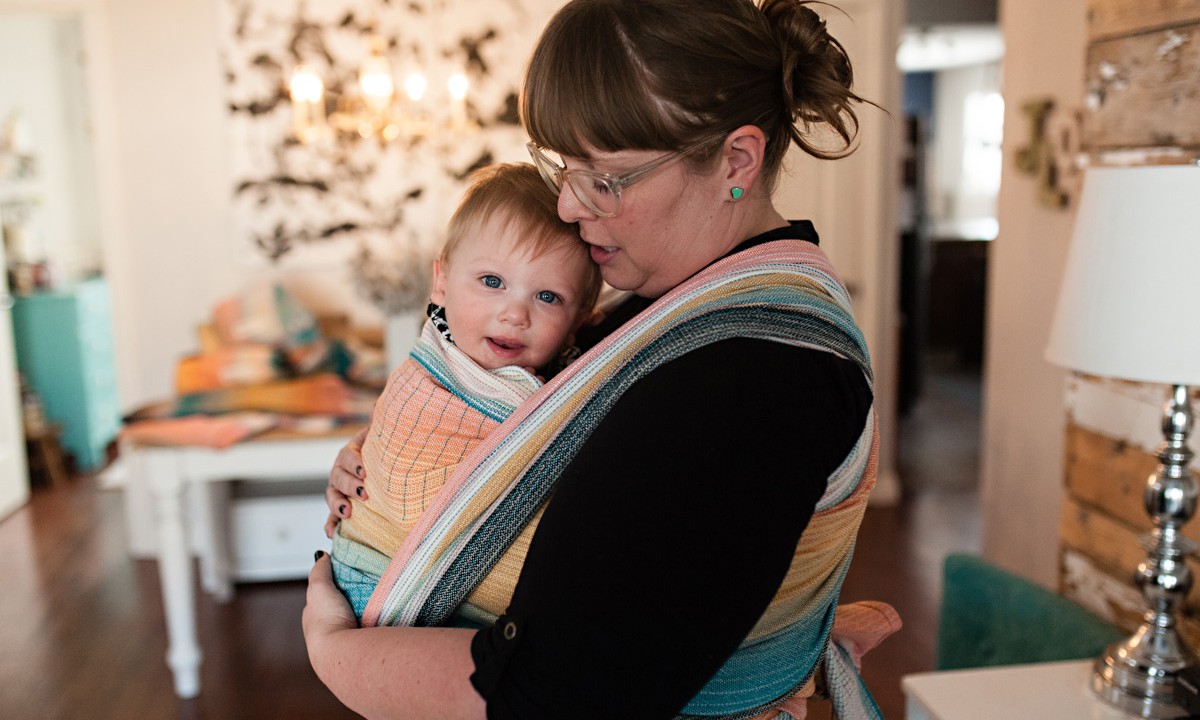 Families come in all shapes and sizes and there are many paths to motherhood. We wanted to celebrate that diversity by creating a special wrap for our friend Lauren Cowles  as she waited for a baby to join her family through adoption.  Knowing Lauren as she and her husband started the adoption process we had the opportunity to talk about how important she felt babywearing would be for her when she was bonding with her baby. Adoptive parents don’t have nine months of bonding time before meeting baby face to face and time in a wrap can be invaluable in forming that bond and attachment that all babies need. Lauren creates these gorgeous works of mixed media collage art. She will layer anything from napkins to old atlases with ribbons, and buttons. Each of her pieces are one of a kind. She incorporates items which connect to the themes of her work. I was inspired by the idea of her using her art to express how much she was longing, waiting and preparing  how she already loved the baby she was waiting for, creating space in her heart, home and family.

We talked about her creating a custom art piece that could be translated into fabric for her to wear the baby she was waiting for and then pairing off a few pieces of her work with pieces of the wrap to sell with proceeds going to support other adoptive families in Canada. We met up while the piece was in progress to choose thread colours which Lauren then added into each of the collages.  All of a sudden in the middle of the wrap design process Lauren got some news! I’ll let her tell this part in her own words:

“Then, all of a sudden it happened. The call came and within two hrs we met our son, learned how to feed him and swaddle him, how to change his diaper. Our wait was over and our new journey with the three of us began. Becky arrived at our door a few days later with a wrap to loan us until our custom wrap was created. Of course I needed some babywearing guidance as I hadn’t really ever wrapped a baby and the first time felt so good! It helped me not only carry him every waking moment but also to get things done. One thing the agency tells you to do as waiting parents is to continue with your life, go on the adventure, keep planning and don’t hold off on things because maybe you will get the call. We learned this closer to end of the second year. We always had a plan B. So when O arrived we had things planned. I am a self employed artist so a week later I had my art retreat and 2 weeks after that I had a market I organized. We had to fit a baby into what was already planned. Looking back now I have no idea how we did it but I know wearing him for the first few months helped. I was able to create and paint with him on me. I could work on my blog and website while he was with me. It was so important for me to spend every moment with him to bond and I wasn’t going to let my work interfere with that. I was thankful I could still work and not lose a moment with him.” 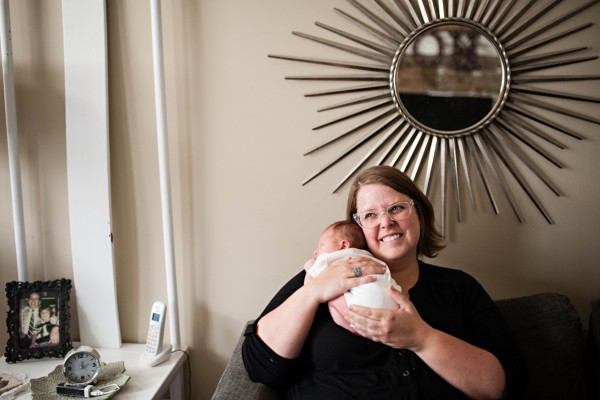 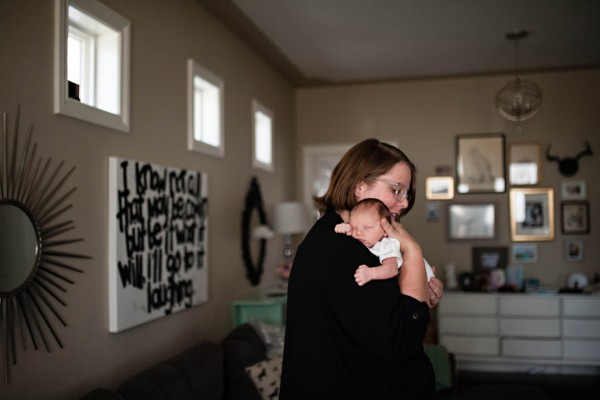 When Uppymama Arrow was ready I took a stack of them over to Lauren’s house for her to choose and was so excited to see this revive her love of babywearing: “As time moved forward we slowed down, art and mothering became second nature and he grew. Boy did he grow!!! He is now a few days away from turning 11 months old and our custom wraps arrived. In the past couple of months I have not carried him as much as I used to. He is on the move and loves to play on the floor. I felt bad taking him away from his toys just so he could be close to me. It was also hard to carry him on the front and do the things I needed to do. Having our new wraps has changed that mentality. I wear the wrap without him in it and he wants up and down so much it is great to have some extra support when carrying him around. I am also a week away from my biggest market ever and to get work done carrying him on my back has really freed me to go into my studio and create.” 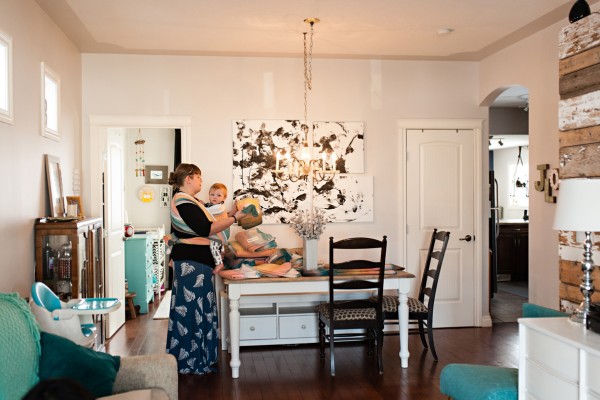 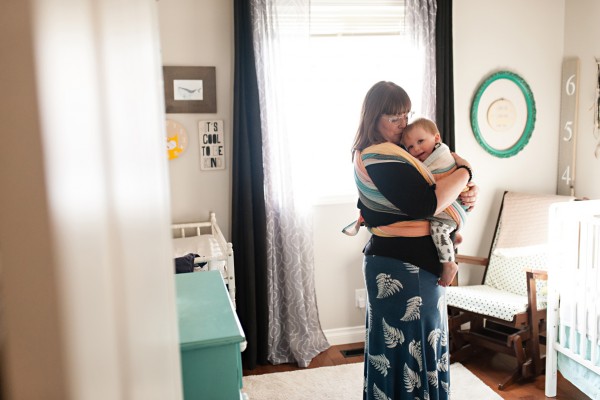 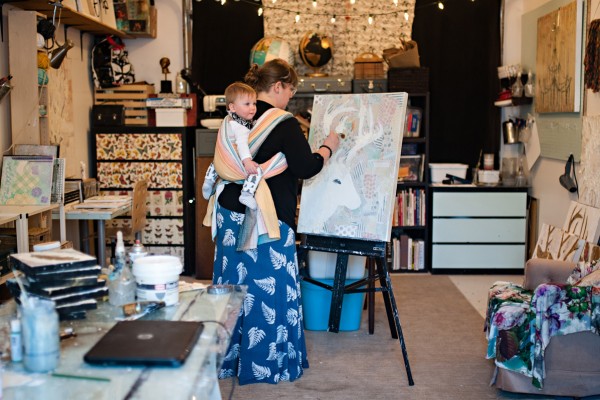 I am so grateful to Lauren for sharing her journey and her story. Multiple members of our Uppyteam have either been foster parents or have adopted children and it is near and dear to our hearts. I now feel so blessed to have one of Lauren’s beautiful pieces from her “Adoption Wrapped In Love” series hanging on my bedroom wall to celebrate my own unique family. Lauren put it so beautifully when she says:

“My journey to motherhood was not conventional but it was mine. Including babywearing into my journey has helped me gain confidence in my parenting. I can’t birth a child or breastfeed, but when I wear my baby I am a mother. My body is soothing and loving my baby, that is what it was meant to do!”